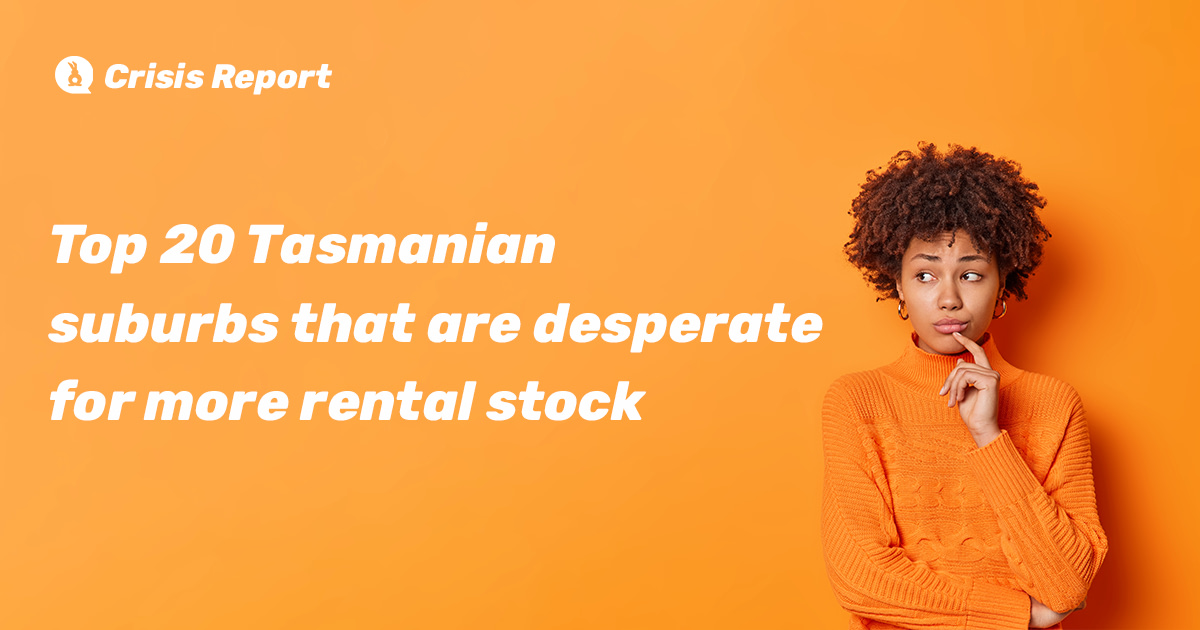 New research commissioned by RentRabbit.com.au has found the top 20 rental markets in Tasmania that are desperate for more stock.

The quarterly RentRabbit.com.au Rental Crisis Report identifies the top 20 suburbs in Tasmania where tenants desperately need more rental accommodation to come onto the market, because the suburbs:

The research began by analysing every rental house market in Tasmania, before filtering out suburbs that:

That left a small list of Tasmanian suburbs. To establish a top 20 ranking, these suburbs were then ranked based on their average weekly household income (from lowest to highest).

socio-economically disadvantaged areas, they have low household incomes and it’s incredibly hard for them to find rental accommodation,” he said.

“Some of these renters are living in suburbs that have a vacancy rate of 0%, which means rental properties are being snapped up the moment they become vacant. Unsurprisingly, in all these suburbs, rents have increased over the past year, often by double-digit percentages.

1.  The house market of Rocherlea (Launceston)

4. The house market of Ravenswood (Launceston)

7. The house market of Mowbray (Launceston)

11. The house market of Devonport (Devonport)

14. The house market of Latrobe (Devonport)

Our rental system’s broken. It’s nobody’s fault, but everybody’s problem.  Between difficult tenants, rental turnover, sudden repairs and the odd revenge review—being a private landlord can be tough. But it’s about to get easier. Rent Rabbit improves rental for everybody—including landlords. We use the engagement approach of companies like Airbnb and Uber to engage tenants…

New research commissioned by RentRabbit.com.au has found Sydney’s standout suburbs for tenants who want to live in good locations but have only average incomes. The quarterly RentRabbit.com.au Tenant Opportunity Report identifies the top 20 suburbs in Sydney where tenants can find affordable rents in decent suburbs that are within commuting distance of the CBD. To…

Step 1 – Know Your Rights In Victoria, when you rent a place to live, you will usually be asked to pay a rental bond. The rules around bonds are set out in the Residential Tenancy Act 1997, the bond is held in trust by the RTBA (Residential Tenancies Bond Authority) General requirements of rental…

RentRabbit is Australia’s newest provider of property information and analytics using user-generated data helping Aussie renters compare properties and be better informed. The quarterly Rent Rabbit Tenant Opportunity Report identifies the top 20 suburbs where tenants can find affordable rents in decent suburbs that are within commuting distance of the CBD. To make sure suburbs…